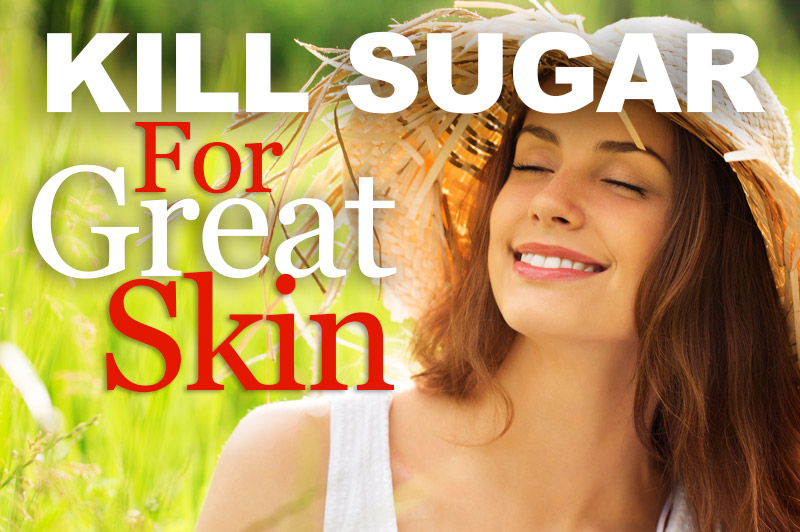 Want to have ageless skin whether you’re 35 or 80? It’s easy, I promise you. First, change your way of eating from a diet of packaged convenience foods to pesticide-free, whole organic foods that are unprocessed. Next, never use canned fruits in any recipe that needs sweetening. Instead, go for fresh top quality stevias. Then use organic spices and herbs to create great flavors for all your dishes. The sugar content of any food is most deliberately hidden by food manufacturers who, if they list it at all, give it a name that shoppers will not recognize. It’s essential to be very cautious when looking for alternatives to sugar itself. These fall into three main categories: Artificial sweeteners—which you must avoid like the plague if you value your skin and your health. Sugar alcohols. So-called natural sweeteners. Here’s what you need to remember: The first group never to use are the artificial sweeteners—each very harmful in its own way. These include aspartame—the worst of the lot. You’ll find it in Equal and NutraSweet, as well as hidden in all sorts of packaged foods and sugar-free gums. Then there is sucralose. It is also nasty. It’s the main ingredient in Splenda. And of course, there is good old saccharine, which you’ll find in Sweet and Low, as well as many other artificial sweeteners by different names. There is much evidence to back up how dangerous these are. Avoid all of them completely forever about your skin and your health. The second group of sugar alternatives are the sugar alcohols. They all have “ol” in their name—such as xylitol, sorbitol, maltitol, mannitol, glycerol and lactitol. These sugar alcohols can spike blood sugar, so beware. Just because some product label says “sugar-free” this is not necessarily the truth, nor can you be sure it is calorie-free. Probably safest of the lot is xylitol, but only if you use it occasionally and sparingly. (By the way, xylitol is deadly for your cats and dogs.) The third group of sugar substitutes is often referred to as “natural sweetener”. This is a misnomer if I have ever heard one. Take, Agave Syrup and Agave Nectar which are even worse than the dreadful high-fructose corn syrup. It’s absurd to refer to these products as “natural”, despite all the advertising hype that tries to make you think that they are. Higher in sugar content than almost any other sweetener on the market, Agave has virtually no nutritional value. As for honey—this has become seriously distorted because of the hideous damage being done to bee colonies. You want to avoid honey as well unless you can gather it from your own hives. So what are your safest choices? Stevia is number one on the list. This is an exotic herb which grows in subtropical areas of South America. This plant has been used to sweeten herbal drinks since pre-Columbian times. It’s a godsend for enhancing health and reducing your sugar intake. It’s great for sweetening drinks and baking dishes. But make sure you use only the best. All sorts of so-called stevias such as Truvia and Purevia continue to be promoted by multinational corporations. They call themselves “all-natural sweeteners”. In reality, they have been manufactured only from “certain active ingredients” in the stevia plant, not from the whole plant. As a result, they are distortions of the real thing. Don’t use them. Another good natural sweetener is Lo Han Guo, which comes from a Chinese fruit. It’s more expensive than stevia. Sugar of any kind is a killer both in terms of your health and your good looks. Make these changes now and in as little as three weeks you’ll be amazed at how much better your skin looks, and how much better you feel all round. You may be surprised after a month or so to find you no longer even want sugar once your body has quite naturally eliminated its sugar cravings. I find this happens to many, many people. It feels like breaking free from a control mechanism that once undermined your life and your sense of self. Try it and find out for yourself.

finally moved the weight from my mind and body and soul.

This is an amazing program to work on many different levels of your body. The weight loss is a bonus in the process as the real change is that it helps you learn how to think and feel differently about food. I have lost 25 pounds in under 2 months. I feel different about food and have lost the cravings for sugar and starch. I am eating amazing healthy food and enjoying it! The Essential Spray with the weekly support from Aaron & Leslie really makes a difference. Their program supports all aspects of your health. I felt this was a very holistic approach to weight loss.

This has to be the easiest way to stay in shape ever. Leslie Kenton has compiled an incredibly user friendly program based on the discovery of the homoeopathic HCG. This together with the food plan creates a two fold transition to a magnificent body shape and a spiritual awareness. Thank you Leslie your book Cura Romana is life transforming.

The immediate results are great

The spray IS GENUINE and IT WORKS

Please dismiss all who say the spray is just alcohol and water. No process is perfect, neither is the manufacturing, bottling or transporting. If there appears that something isn't quite right, do not assume that the product is rubbish, just contact the seller and they will replace your product. This spray MUST be used in conjunction with the book or the on-line Cura Romana program. IT WORKS. If you have weight loss stalls whilst following the protocol to the letter, please remember that FAT MOVES. It will move from your hips to somewhere where your body needs it either to be used as fuel buring the protocol either for after you finish the protocol. It moves it from an innaccessible sore to an accessible one. Even your wrinkles will get filled so do not worry. THIS IS NOT A HORMONE!!! Never mess around taking hormones. This spray uses same neuro pathway and neuro centre as the HCG and has the same effect as the HCG but IS NOT a hormone. One downside: once you identified foods you should not eat during consolidation, you do have to stop eating them. You cannot go back to your former way of earting. Do not undertake this protocol if you are not serious about giving up those favourite foods that caused you to put on weight (and never get it off) in the first place... If you think that following the protocol is difficult, please re-consider-this is the easy part. Staying clean is!! I don't want to put anyone off because I don't believe there is anything like this out there but you do have to be serious about not only your weight but your health...

The Cura Romana Journey is an absolutely wonderful program which enabled me to move out of my comfort zone and achieve seemingly miraculous results with ease and support. It's helped me face my fears and learn to get on with life as a pleasure.

Cura is a way of life

Mental as well as physical transformation. Cura is a way of life healing from within along with the perks of a nee body shape - a bit like the caterpillar turning into a butterfly!