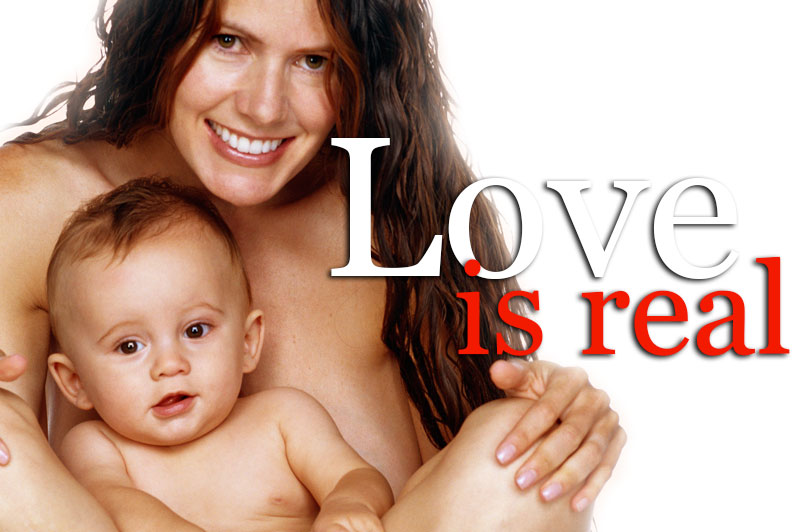 How I Learned That Love Is Real

My first child was born in a huge teaching hospital in Los Angeles. The labor was long and regrettably not natural. I was given an analgesic during labor and an epidural for the delivery. It was all very cold, efficient and mechanical. The hospital I was in happened to be a Catholic one in which every other woman there seemed already to know the ropes since she was giving birth to her fifth or eighth or tenth child. Nobody bothered to tell me much about what was going on or what was expected of me. My baby was taken from me immediately after the birth and put into a nursery with all of the other babies while I was wheeled off to a private room. Soon they brought this tiny creature to me. I held him in my arms and stared at him in stark wonder. Then at three hourly intervals he would reappear for twenty minutes at a time and I'd hold him in bed beside me until the nurse would come and take him away again. The third or fourth time they brought him to me, he began to cry. I nestled him, rocked him, and spoke gently to him but he wouldn't stop so I rang for the nurse. `My baby's crying,' I said, `What should I do?' `Have you burped him?' `Burped him?' `You have fed him haven't you?' `Fed him? Am I supposed to feed him?` The nurse took him and put him to my breast. His tiny mouth opened and reached for me as if he had known forever what to do. He began to suck with such force it took my breath away. It was like being attached to a vacuum cleaner. I began to laugh. I couldn't help myself. It seemed incredible that such a tiny creature could have such power and determination. He too had a purpose. He was raw, insistent and real. With every fiber of his being, this child was drawing his life and he would not be denied. Tears of joy ran shamelessly down my cheeks while he sucked. There in the midst of all that clinical green and white, I had discovered what love was all about. It was really quite simple—a meeting of two beings. The age, the sex, the relationship didn't matter. That day two creatures - he and I — had met. We touched each other in utter honesty and simplicity. This experience was for me a true epiphany. My life was forever altered by it. There was nothing romantic or solemn about it. No obligations, no duties, no fancy games, and you didn't have to read an encyclopedia of baby care to experience it. We'd met, just that. Somewhere in spirit we were friends. I knew beyond all doubt that I had found something real and real it has remained.

The plan - with the spray - really works.

Second time of using Cura Romana Weight Loss Plan. I initially lost several stone whilst - and after - using the Essential Spray and over the year my weight rose slightly then naturally maintained - three stone lighter than when I commenced the protocol. Exactly as was predicted. I am using the spray again and rather haphazardly following the plan this time (it isn't easy) - but again I'm changing shape and loosing unwanted weight. I am confident my weight will drop and then as I return to 'normal eating' I will naturally maintain at a new lower weight. I personally cannot cope with the strictness of the recommended dietry restriction without the encouragement of the Essential Spray. Of course you could loose weight by eating too little - and I have tried this - but with the spray combined with the controlled amount of food intake (which is only initially for three weeks) it shows more obviouse good results and it is easier to follow the maintaince programme for the next few weeks and discover that your body really has changed - and continues to change - to its new chosen weight. I say that a restricted diet OR the spray on their own will not give as good or as permanant a result as when the whole protocol and the spray are combined - so you need the book to follow the plan too. The spray doesn't taste or smell unpleasant either.

I am on my sixth day of Essential Spray + Food Plan and I am feeling great. My hunger is completely gone. The skin on my face and body feels so hydrated that I don't even need a moisturizer! I'm so amazed! Cura Romana is something so special and unique. The wonderful thing is that I don't even feel that I'm on a strict diet. I am getting more energized each day and most of the energy comes from my own inessential fat. How good can it get?

I have been following the Plan and taking these drops since August its now November and I have lost 3st 7lb so far effortlessly, with no exercise required. You also get to treat yourself periodically with the GULT Days so it makes dieting easier. Would recommend the drops and the CURA ROMANA book to anyone who wishes to lose weight.

Before I began Cura Romana the theory behind this diet made complete sense to me - it made me realize that all the failures that I'd experienced in the past with dieting were probably not my fault, and this was a huge relief. Once I had spoken to Leslie & Aaron I was totally convinced that this was the only way that I could achieve lasting weightloss. Not for one moment did I think the program would not work and I was really excited and couldn't wait to get started.

It absolutely works and is a great reset.