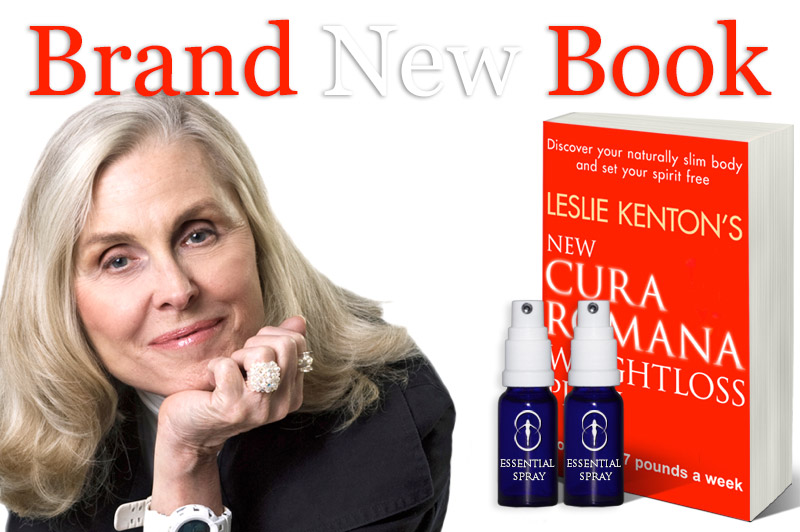 Leslie Kenton’s New Cura Romana Weightloss Plan is out now. A thick handbook in bright orange, this little gem is no simple revision of the earlier book. It breaks new ground for weight loss while exploring territory in the exciting realm of quantum wellbeing. The book brings together Leslie’s hands-on experience with thousands of men and women on the Cura Romana program, merging it with stunning up-to-the-minute discoveries about optimal nutrition and disease prevention. It guides you through Cura Romana’s next-generation protocol for effective, hunger-free weight loss, then reveals practical secrets for becoming radiantly healthy and lean for life. 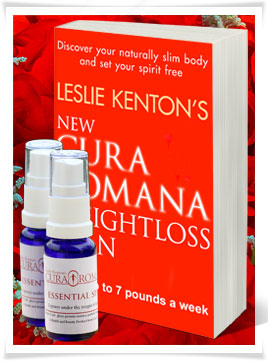 The combination of Essential Spray and the easy-to-follow, exacting dietary plan fosters good functioning in the brain’s control centers—for appetite, fat burning, hormone regulation, emotional balance, and self-confidence. This automatically triggers natural fat-burning. Specific guidance on banishing addictions, rejuvenating the body and clearing food cravings comes next. Then, transformative breakthroughs in body, mind and spirit begin. Many who have experienced this three step Cura Romana process on The Journey Program or The Inner Circle Gold say it can be life-changing. 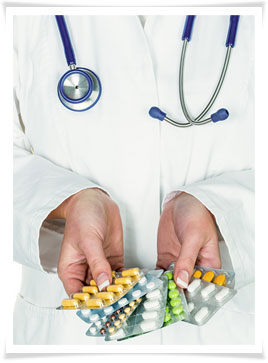 Some of what you read in Leslie Kenton’s New Cura Romana Weightloss Plan is likely to shock you. Since the early 1950s, most of what the powers-that-be have led us to believe about what constitutes a healthy diet has been totally wrong. It has been based not on reliable research but on woolly conjecture, misinformation, and plain old lies. Most of us have conscientiously swallowed their advice. So has the media and even the medical profession. As a result, in the past sixty years, obesity and associated illnesses have reached epidemic proportions worldwide. 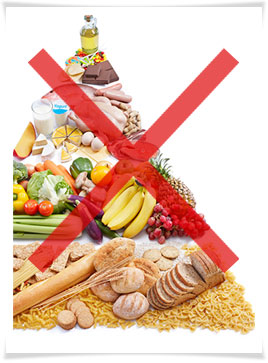 They taught us that natural fats like butter, extra virgin olive oil and coconut oil are supposed to be dangerous. Wrong. They directed everyone to eat a low-fat-high-carb diet, full of grain-based carbohydrates such as cereals. We need lots of carbs for energy, they insisted. Wrong again. We unknowingly trusted guidance from these so-called experts. We ate baked potatoes instead of fries and started buying all sorts of packaged foods thinking that we were making “healthy option” choices. 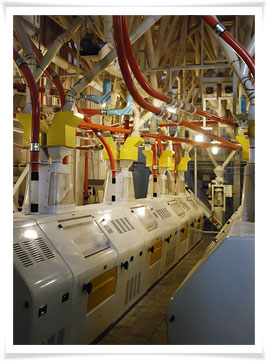 Food manufacturers were quick to seize upon governments’ nutritional directives. They whipped up high-carb, low-fat convenience fare. There was one major draw back to all of this: When you remove fat from a carbohydrate food it tastes like cardboard. So, in order to make their packaged goods acceptable to the public, they were forced add masses of sugar. Conscientiously, we continued to eat the foods they were selling—much to our detriment—all the while believing that we were doing the right thing. For decades, the FDA’s infamous food pyramid—to which all developed countries turn for guidance—ruled supreme. Meanwhile, the incidence of Diseases of Civilization—from obesity and heart disease, to cancer, diabetes, Alzheimer’s disease, mental disorders and depression—has soared exponentially. All of which has earned billions for multi-national food manufacturers but created terrible human suffering. 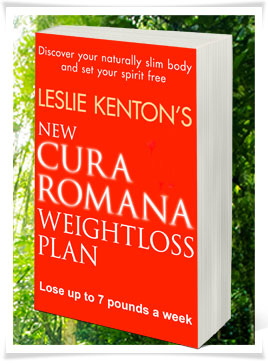 Leslie Kenton’s New Cura Romana Weightloss Plan sets the record straight. It not only covers significant facts in relation to weight control, it also introduces a whole new way of eating and living to protect from early aging and chronic illness while enhancing wellbeing all round. It reveals truths about weight gain and weight loss. (They have nothing to do with calories in, calories out as we’ve been told.) Cura Romana’s redeveloped Consolidation process guides you step-by-step through procedures that can make a new slim body last. The new, advanced Consolidation program gleans its power and effectiveness from valid, accurate, independent research projects destined to turn the dangerous misinformation we’ve been fed for half a century on its head. The information from such truth-telling has only begun to appear in the last three or four years. It is still little-recognized publicly. But it was tried and tested for three years with the help of hundreds of willing participants on Cura Romana’s web-based programs before being incorporated into the next-generation protocol which you will learn about in this book. 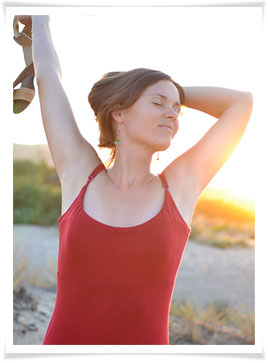 While developing and testing this new program, it became clear that the gifts it brings go further than helping people recover their body’s natural shape and weight. It enables participants to experience not only a transformation in weight and health but an enrichment in one’s quality of life—physically, emotionally, and spiritually. Incidentally, since Cura Romana’s inception almost five years ago, these intentions have always been the foundation on which all of its programs are built. In Leslie’s words: “The ways and means of living a lean and healthy life must no longer be reserved for a privileged few. During my 45 years of researching, teaching and writing about natural health, the most important thing I’ve learned is this: Each one of us, regardless of age, can transform our current life circumstances into an experience of expanded wellbeing, creativity and purpose. We are free to draw on the work of visionary thinkers, and be guided by the valid discoveries of independent pioneers in human health and growth. It is only thanks to the endless generosity and encouragement of such people, and to the support of my visionary publisher, Brenda Kimber, that I am able to share with you my Cura Romana next-generation program. It’s my hope that this new handbook will bring as much benefit to your own life as the research and testing needed to create it has brought to mine. Every blessing... 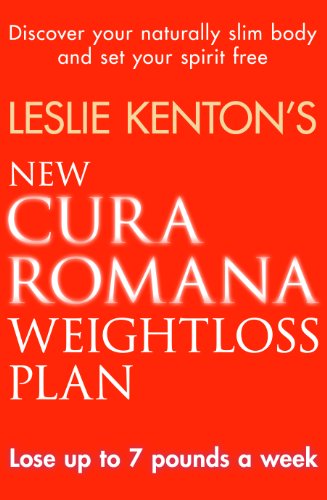 Award-winning writer Leslie Kenton is renowned for her expertise in all matters relating to wellbeing. Her New Cura Romana Weightloss Plan is the culmination of her forty years of research, experience and expertise in life-transforming weightloss. ·You have known forever that the essential you is slim, healthy and full of life. It is time to experience this for real...time to say goodbye to struggles and self-criticism... time set yourself free. ·Now you can discover how to look and feel ten years younger and have more vitality, emotional strength, mental clarity and joy by making simple but powerful changes in how you eat and live.

The plan - with the spray - really works.

Second time of using Cura Romana Weight Loss Plan. I initially lost several stone whilst - and after - using the Essential Spray and over the year my weight rose slightly then naturally maintained - three stone lighter than when I commenced the protocol. Exactly as was predicted. I am using the spray again and rather haphazardly following the plan this time (it isn't easy) - but again I'm changing shape and loosing unwanted weight. I am confident my weight will drop and then as I return to 'normal eating' I will naturally maintain at a new lower weight. I personally cannot cope with the strictness of the recommended dietry restriction without the encouragement of the Essential Spray. Of course you could loose weight by eating too little - and I have tried this - but with the spray combined with the controlled amount of food intake (which is only initially for three weeks) it shows more obviouse good results and it is easier to follow the maintaince programme for the next few weeks and discover that your body really has changed - and continues to change - to its new chosen weight. I say that a restricted diet OR the spray on their own will not give as good or as permanant a result as when the whole protocol and the spray are combined - so you need the book to follow the plan too. The spray doesn't taste or smell unpleasant either.

I am on my sixth day of Essential Spray + Food Plan and I am feeling great. My hunger is completely gone. The skin on my face and body feels so hydrated that I don't even need a moisturizer! I'm so amazed! Cura Romana is something so special and unique. The wonderful thing is that I don't even feel that I'm on a strict diet. I am getting more energized each day and most of the energy comes from my own inessential fat. How good can it get?

I have been following the Plan and taking these drops since August its now November and I have lost 3st 7lb so far effortlessly, with no exercise required. You also get to treat yourself periodically with the GULT Days so it makes dieting easier. Would recommend the drops and the CURA ROMANA book to anyone who wishes to lose weight.

Before I began Cura Romana the theory behind this diet made complete sense to me - it made me realize that all the failures that I'd experienced in the past with dieting were probably not my fault, and this was a huge relief. Once I had spoken to Leslie & Aaron I was totally convinced that this was the only way that I could achieve lasting weightloss. Not for one moment did I think the program would not work and I was really excited and couldn't wait to get started.

It absolutely works and is a great reset.